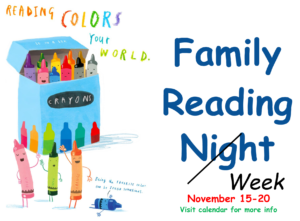 Listen to special stories from community members including Mayor Haig Haleblian, the librarians from School District 47 and CLPL staff. Sponsored by the Illinois Secretary of State, the State Librarian, Jesse White and the Illinois Center for the Book, Family Reading Night is an annual statewide event held in November to encourage families to spend quality time reading together. Family Reading Night is Nov. 18. However, we at CLPL love reading so much, we turned the night celebration into a weeklong event! Click on the following programs to watch them (note: you can watch the programs anytime on the CLPL YouTube channel).

Gayle Johnston (Glacier Ridge Elementary School librarian) reads “Bob, Not Bob! *to be Read as Though You Have the Worst Cold Ever” by Audrey Vernick and Liz Garton Scanlon

Cary Waxler (CLPL Board Trustee) reads “The Book With No Pictures” by B.J. Novak