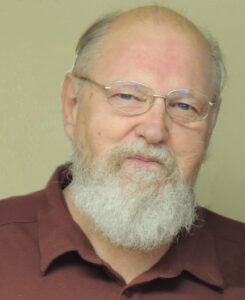 John Engebretson has retired from the Crystal Lake Public Library Board of Trustees after 30 years of service.

A lifelong supporter and patron of libraries, John joined the CLPL Board in April 1991 as a way to give back to an institution he appreciated and respected.

“My initial reason for serving was to pay back the community for the good times we had at the Library,” John said in an interview nine years ago, just after marking his 20th year on the board. “It was a good fit with my experience. I felt I could use a few of the talents I had in a positive way.”

Many people know John from Home State Bank in Crystal Lake, where he served as the facilities manager for more than 30 years. Prior to that, he worked in international banking for 23 years. Just three years into his first term, the Library underwent construction of the 1995 addition, which added 13,000 square feet to the building along McHenry Avenue.

Twelve years later, in 2007, the Library Board implemented Project Shoehorn, which aimed to maximize use of the existing space and carry the Library through the next five years. By 2011, the board was already looking into building a new facility to serve the growing community. John said those years were among his most challenging on the board.

“Investigating possible alternative locations for the Library and justifying the decision to keep the Library in town, in the neighborhood and not move it outside of the center of town was one of our biggest challenges,” John said.

CLPL’s referendum to build a new $28 million Library on its existing site narrowly failed in 2016, but the aging building’s problems continued. Earlier this year, the Library Board oversaw a major repairs project to update part of the old HVAC system, add a drive-up service window and replace leaking portions of the roof and windows, among other work. As in the previous years, John served on the Facilities Committee (a subcommittee of the Library Board), which plays a critical role in building maintenance and repairs projects.

Over his three decades of service, John has worn every hat. He served a total of four years as board president, six years as treasurer, two years as vice-president and two years as secretary. He spent 16 years as chairman of the Facilities Committee. He also served on the Governance and Finance committees, as well as ad hoc building committees.

“John devoted many years and countless hours to making the Crystal Lake Public Library a great community service,” Library Director Kathryn I. Martens said. “He will be greatly missed.”

John’s departure marks the closing of a long chapter in his life, which has always included ties to the Library. Like so many of his generation, John was afflicted with polio as a child. He was a “quiet, little kid with braces and crutches” who had two operations on his legs, he said in the 2012 interview. Since sports weren’t an option for him, his “big activity” was visiting the Logan Square Library (a branch of the Chicago Public Library system) with his mother.

More than a decade later, while researching a college paper at Luther College in Decorah, Iowa, John met a pretty young woman who worked at the Library and later married her in 1966. He and his wife, Judy, settled in Crystal Lake in 1972, where they raised their daughter Jennifer. Judy was a teacher for many years at Lundahl Middle School. She passed away Feb. 8, 2021 at the age of 76.

During his tenure on the board, John has always been a strong supporter of the Library staff.

“The Library is not just books and videos, but it is the people who work there,” John said. “The Library can help individuals one-on-one find whatever they are looking for because the staff are trained and know what sources the Library has to offer.”