Library Director Kathryn I. Martens Retires After 31 Years of Service 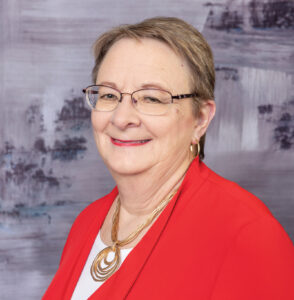 Kathryn I. Martens is culminating her last CLPL chapter of a lifelong career in the library field.

For the most part, the ending to her story as director of Crystal Lake Public Library for the past 31 years is a happy one. Though it’s fair to say she didn’t foresee spending the final two years coping with a once-in-a-lifetime pandemic while simultaneously managing a major building repair and renovation project. Both challenges have had Martens, aka “KIM,” putting in long days as of late. She delayed her retirement until the recent repairs project was completed. She wanted to be sure all was in order before leaving.

“The board and staff depended on me to figure it out and lead the way,” Martens said. “When COVID hit, our staff adapted and grew in many areas to keep providing CLPL services
remotely. I had the vision, and the staff made it happen. We never stopped working.”

Looking around Martens’ office, you see keepsakes and items that speak to her three decades at CLPL. On her desk sits a 2016 ATHENA Leadership Award, presented to individuals who have achieved the highest levels of professional excellence. Next to the award are photos of her sons, grandchildren and family members along with a few library knick-knacks. 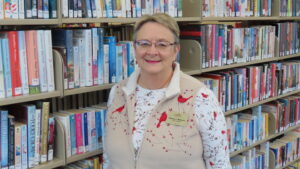 A massive wall shelf behind her desk is filled with books and manuals. Lining another wall are file cabinets brimming with every possible document about the Library as Martens – a librarian at heart – is renowned for her exceptional organizational skills and file retention. On a coat rack hang library bags from past years, a few Summer Reading Program T-shirts, and her “green coat,” which she wears as a member of the Crystal Lake Chamber of Commerce Ambassadors. When chamber duties call, Martens slips into the coat and heads out to a local ribbon cutting ceremony or mixer to lend her support to new business owners. She’s served on the Chamber Board and on several subcommittees in almost every capacity – chairperson, vice-president, secretary/treasurer for the past three decades.

A poster of the Blue Ridge Mountains is reminiscent of the many years Martens spent in Virginia, where, as a newlywed in the late
1970s, she lived on a rural farm and commuted a scenic route to the two-county library system where she worked. Coincidentally, on the day
she gave birth to her first son, Jake, she was named director of the Montgomery-Floyd Regional Library, a system that had three library buildings, two bookmobiles and a service area of 777 square miles. She served in that position for 10 years before longing to return home to Illinois in December 1990.

“I wanted to be near my family. My mom lived in Huntley and she heard the director (at CLPL) was going to retire. I came here twice for interviews and,” Martens said. “I immediately liked the idea of having a library in one community, which I didn’t have in Virginia. I embraced this idea, and once I got here with my boys, I embraced the community. Honestly, when I walked into this position, the first thing the board told me was that this building was their biggest problem.”

Martens oversaw three major building renovations projects during her tenure. The first, from 1995-1998, was a huge challenge with general contractor problems, lots of rain and many delays, but eventually added 13,000 square feet to the 27,000-square-foot library. Project Shoehorn came along in 2007. Meant to provide a five-year solution to the ongoing building challenges, it was a reorganization project aimed at maximizing current space.

After that, the years were filled with exploratory committees, land studies, community surveys, hundreds of meetings and eventually one failed referendum in 2016 that sought approval to build a new library. As a result, Martens and the board regrouped and made improvements to the building’s HVAC, roof, windows and lighting in 2020-2021. They also added a drive-up service window to assist residents with mobility concerns and updated circulation technology.

Atop a tall file cabinet in Martens’ office remains a model of the proposed library building she spent so many years fighting for, and still hopes will become a reality for the Crystal Lake community one day.

“She was committed to Crystal Lake,” said Crystal Lake resident Don Peters, who worked with Martens for 21 years while serving on the Library Board of Trustees. “When she commits to something, she’s all in. That’s why she stayed around as long as she has. She believes – and so do I – that this community needs a new library. It’s absolutely amazing that she’s been able to keep this Library building at the level it’s at. It’s the best library in the county. She’s so knowledgeable that other organizations seek her out for help. She is going to be missed. The board has big shoes to fill.”

Martens’ last day at the Library will be May 20. A public reception is planned from 2-4 pm Sunday, May 15 in Adult Services. Community members are invited to stop by, reminisce and bid farewell to her before she heads off to new adventures.

Martens plans to spend her newfound freedom traveling and camping with her family, her favorite past-time. She’ll also be training and competing with her dogs, and pursuing many other interests. She may even travel back to those Blue Ridge Mountains.

And, we fully expect she’ll continue to patronize the Crystal Lake Public Library and check up on her “work family.”